Yamaha’s made three V-FET power amplifiers over its lifetime. B-1, B-2 and B-3. B-3 is one of the best amps I’ve heard so far, two B-3s to be exact. She’s a stereo amplifier that can be switched to a BTL mode. That means you can use one amp for one channel, it’s so called monoblock. B-2 is also kinda built as two monoblocks, but smashed together into one chassis. In theory, since the B-3 is newer, it should also be better, but we’ll see, or hear. 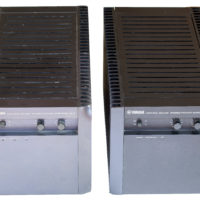 It may seem like I’m obsessed with the V-FET amplifiers, and yeah, maybe I am. But they sound so bloody awesome, I can’t resist. V-FET or SIT transistors were developed by Nishizawa Jun-ichi, known as Mr. Semiconductor, and rightly so, not only he was pretty good at his job, he was so obsessed with it, he was actually thinking about naming his son after a transistor. And as him being Japanese, there were only Japanese companies utilizing V-FETs in their products. Yamaha, Victor, known as JVC outside of Japan, Sansui, SONY and Hitachi. Unlike Yamaha, JVC and Sansui, Hitachi and SONY also produced Integrated Amplifiers with the V-FET transistors. 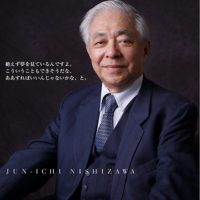 The production ran only for couple of years, before everybody turned their backs on V-FETs and started using much cheaper and easier to work with MOS-FETs and BJTs. They say the V-FET is as close to triodes as transistors will get. And it’s true, these transistors produce very warm and sweet sound, but unlike the valve amps, they’re also very detailed. I hate to repeat myself, but these are one of the best amps, period. Either new or old, you can hardly find anything better than this. B-2’s got four pairs of Yamaha’s own transistors, attached to these big heat sinks. These are a bit dirty but they are working perfectly fine. 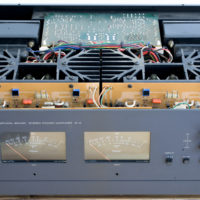 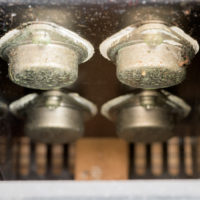 I had explained it five billion times before, but that doesn’t mean I can’t do it one more time. Power amp is a special kind of beast. Everybody is usually used to integrated amplifiers which is essentially a power amp and a pre-amp in one chassis. Power amp takes care of the amplification of the signal, while pre-amp is there for volume control and additional inputs and outputs. Integrateds are more convenient, since they take up less space and are considerably cheaper, but it also means they are not as good as their bigger sisters. Since I want to know how the B-2 sounds on its own, I have connected the amp directly to the source, DAC in this case, and left out any pre-amp that could interfere with the sound.

As everybody would expect, the B-2 came before the B-3 and after the B-1. The B-1 was Yamaha’s masterpiece and one of the first, maybe even the first V-FET amplifier. I am not sure who made the first one, but it was either Yamaha or SONY. SONY’s first V-FET was TA-8650 which was an integrated amp. These amps were such a massive success, other Japanese companies also wanted a piece of the pie. JVC came out with JM-S7 power amp, Sansui with BA-1000 power amp and Hitachi with their Lo-d HA-500F. I’ve heard only JVC and it’s a brilliant piece of hardware, not as great as the Yamaha’s amps, but certainly better than almost anything you can think of. 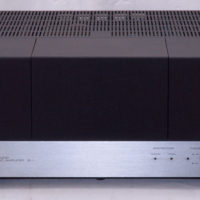 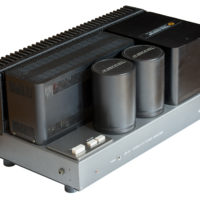 B-2 was released in 1976 and she was Yamaha’s hi-end amp, and the very steep price of 200 000 yen reflected this fact. Today, it’s easy to get one of these for a price between £500 and £1000, depending on the condition. Yamaha produced about 10 000 of these amps, which is quite a lot for an amp in this price range. There were two colours, the boring black that I have and this much better looking silver model which wasn’t released in Japan for some reason. 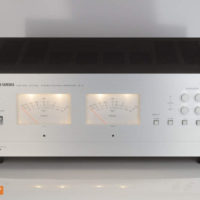 Alongside the B-1, Yamaha released pre-amplifier C-1. And they did the same thing for the B-2. I haven’t tested the C-2 yet, but I wonder how it sounds coupled with some of the Yamaha’s power amps. Unlike the C-1, which was also V-FET powered, Yamaha abandoned this concept and left out the expensive transistors off the equation. In the B-2 manual, Yamaha’s bragging about both, C-1 as well as C-2. Maybe Yamaha was aware that the C-1 is still better, than their latest product. What is quite interesting that in 1985, which is 9 years after the B-2 and 8 years after the B-3, Yamaha released B-2x. It’s got nothing to do with the B-2. It doesn’t even  look similar and it doesn’t have the V-FET transistors. However, I have yet to find out how the B-2x sounds. 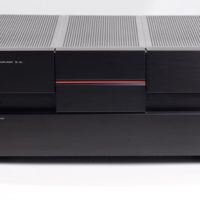 She’s not the pinnacle of a design, but she’s solidly built and looks quite interesting, at least the front panel, unlike the B-3, which looks like a UPS. What I always loved about old amplifiers are VU meters, even though they are pretty much useless, but they look cool. Next to the VU meters are some buttons and knobs, nothing too special about them, this button turns off and on speaker output and with these you can switch between two pairs of speakers. These knobs are usually quite useless, since most people use pre-amps to control volume, however, if you don’t have a pre-amp or your source can’t change the volume, these can come in handy. These level controls usually make the amps sound a bit worse, but in case of the B-2, I haven’t noticed any sound degradation. 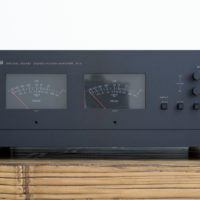 Back of the amp is fairly simple as it should be. As you can see, it’s a 100 volts Japanese version, and as usual, I needed a step-down transformer. Unlike the B-3 which was limited for the Japanese market, the B-2 was made for the entire world. These old amplifiers always featured at least one AC outlet, and the B-2 wasn’t an exception. And then we’ve got the “speakers” section. You can connect up to two pairs of speakers and switch between them here on the front panel. Meter section is there for one reason, either measuring what’s coming through the B-2 which needs to be set to “internal” or measuring another external device which goes to these terminals and the switch needs to be set to “external”. What’s really not that great, however, are the speaker terminals. Honestly, I’ve never seen worse piece of crap than this. Not only you can’t fit in a thicker wire, but even if you somehow manage to fit the wire and lock it down with its crappy mechanism, there’s quite a big chance it will slide out no matter how tight you fasten the bloody screw. It’s a good thing you usually need to do it only once, when you’re setting up the system, because every time I was trying to fasten the screw, I wanted to kill myself. 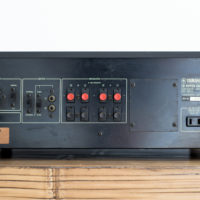 With the DC switch, you can choose between normal and DC mode. What does it mean, you ask? Normal is essentially a high-pass filter, it filters very low frequencies and lets anything above 10Hz pass. It also sort of protects your audio equipment against unwanted parasitic power spikes. On the other hand, no filters are perfect and DC mode should sound slightly better.

Getting inside is as easy as getting into a woman’s knickers. You can see it’s practically split in two parts, except for this PCB which covers four 18 000uF caps. Each half has its own transformer, heat sink and this PCB. One half, one channel.

Power output is 100 W into 8 ohms. She will handle most of home loudspeakers with ease. Distortion is pretty low, 0.08%, SNR is 115 dB, and she weights 26 kg, which is about 57 lb. Even though it may seem like it, it’s not that heavy, compared to the B-1, which weights 42 kg which is about 93 lb. Unlike the newer B-3, which is Class A/B, the B-2 as well as the B-1 are Class A. Class A is considered being the best for audio reproduction. However, it’s got one nasty weakness, it uses maximum power all the time, even when the amp is producing zero output, which is better for distortion, but highly inefficient. The wasted energy is then converted to heat. Class A/B on the other hand is far more efficient with little to no sacrifice to distortion and thus sound quality, presumably.

The most important part of every amplifier, is of course what’s coming out of it. In case of the B-2 it’s a musical perfection. She can handle any kind of music or sound for that matter. I had to compare her to the B-3s, of course. First, I did an AB listening test with one B-3 and then with two B-3s connected in BTL mode, and I found out an interesting outcome. To my ears the B-2 was a tad better than one B-3, but a tad worse than two B-3s, in terms of details and soundstage. The sound is very sweet and warm as you’d expect from a triode not a transistor. And that’s the great advantage of any V-FET amplifier. Triode-like characteristics and astonishing details. If I hadn’t heard the B-3s, I’d say that the details are perfect, you can hear every touch of the guitar string, every piano key stroke, every detail, that’s outside of range of most of other amplifiers. The sound stage is overwhelming, but in a good way. You feel like all the musicians and instruments are in the room with you, it feels kinda like a live concert, but unlike the live concert the reproduction quality is spectacular and without the annoying people around you. Whatever track I played, she was able to reproduce any kind of frequency. Bass response is superior to anything I’ve heard so far, except for the B-3 of course. It’s deep and incredibly clean. Mids are perfectly detailed, you can hear everything, that’s actually in the recording and the same thing goes for heights. Some amps tend to exaggerate the heights and it sometimes becomes too sharp and very unpleasant to listen to.

And that was the Yamaha B-2, it’s a brilliant amp and her being a V-FET amp, she sounds very similar to the B-3, but I just prefer two B-3s over the B-2. The B-3 looks terrible, and you don’t want to show it off to anybody, but sonically, it’s just superior. I haven’t heard the B-1 yet, but what I’ve read on various chats and discussion websites, the B-1 should sound even better. Well, some people say that the B-1’s better, some of them praise the B-2s and some of them the B-3s, so it’s a bit confusing, but I’ll find out who was right when I try all of them. Anyway, you can hardly find a better amplifier than the B-2, and what’s also great about it, it’s bloody cheap. I’ve had a chance to compare it to my mate’s Accuphase P-7100 and the Yamaha sounded better to my ears. Which is a bit embarrassing, considering the Accuphase costs ten times more and is 30 years younger. There are still couple of V-FET amps I haven’t heard yet, like the Sony TA-N7 power amp, which is supposed to be the best of the V-FET amps. For now, the Yamaha B-3 is unbeaten and even though it looks terrible, it sounds absolutely astonishing and the B-2 is very close behind.