I’ve put another V-FET power amp to test. This time, it’s the Victor JM-S7. You may not know the name Victor which is a Japanese company, and its full name is Japan Victor Company known as JVC in the rest of the world. Victor is one of the very few companies that utilised V-FET transistors in their amplifiers. Well, in this case I should use singular, Victor made just one and as it often was with Japanese, she was of course made only for Japanese market, hence the name Victor and not JVC. Unlike Yamaha or SONY, Victor didn’t use its own transistors, but rather ones made by NEC.

I’ve tested one of the Yamaha’s V-FET power amps B-3 about a month ago, and it’s a brilliant amp, one of the best out there. And since the B-3 is so good and also utilises V-FET transistors, I’ve got no choice but to compare these two. And since they are using similar transistors, they should also sound very similar. Unlike the B-3 which is purely a Class AB amp, JM-S7 is kind of Class A. Why kind of you ask? Well, she KIND OF works in both classes, depending on the volume level. She works in Class AB in idle and very low volumes which saves energy, then she switches to Class A in mid volumes which doesn’t save any, but it makes the most out of the transistors in the most important volume levels and then again switches back to Class AB in higher volumes. It’s a pretty clever design.

Since the JM-S7 is a power amp, she needed a pre-amp. And even though Victor had released many pre-amps, they’ve decided to make one tailored especially for the JM-S7. And so, Victor came out with JP-S7. I’m not going to use her for this review, because I want to test the power amp without any additional interference. I will, however, make a separate video.

As it usually is with the old Japanese electronics, there is no information whatsoever about them online and not even JVC couldn’t or wouldn’t help me, saying that they have no information about that anymore. All I could find out was the price in 1975 which was 230 000 yen, that wasn’t exactly cheap, it was a high-end product after all. But she didn’t sell very well and that may be an overstatement, it was a disaster. And that’s the reason, why she’s one of the rarest amplifier of the V-FET family today. And that’s it about the history, let’s have a look at the specifications.

Power output is 110W per channel into 8 ohms, which is more than enough for me and should be for any home user, unless you’re half-deaf. Distortion at maximum power output is 0.03% and since the amp operates in mid volumes in Class A the distortion in mid volumes is a little bit lower, which is 0.02%. It’s not a huge improvement but it’s there. I doubt anybody could actually hear the difference, I certainly can’t. Frequency response is pretty good too, it ranges from 7Hz up to 80kHz.

She’s got a very unusual design and a very good build quality. Unusual, yes, but I kinda like it. The two 22 000uF main caps are not inside the chassis as it usually is, but rather outside in all their glory, as well as the massive toroidal transformer, the rest of the electronics is in the body itself and under the top cover.

I never understood why there are headphone jacks on these high-end amps, it’s like putting a laser sight on a minigun, but if you want to use headphones, you certainly can. The power switch is located right above the power on indicator light, just press the button and after the two relay clicks, you’re ready to go. You can connect either one or two pairs of speakers and enable each of them with two buttons right next to the power button. Speaker terminals are located as usual on the back of the amp right next to the power cord and another kind of useless feature, the power outlet. Since the outlet is unswitched, it’s only useful if you don’t have enough wall sockets around.

On the other side are two RCA inputs, there’s nothing special about them of course but right next to them are little volume attenuators. They need a screwdriver to turn and for a good reason. You shouldn’t touch that on the power amp. Any additional potentiometer between the sound source and the speakers is pretty much unwanted, because there is a very good chance it will worsen the sound. For managing the volume, you usually want to connect a pre-amp, but if you connect your sound source directly and your source doesn’t have any volume control, these may come in handy.

Another thing you’d need a pre-amp for, is lots of inputs and outputs, because the JM-S7 is a power amp, it has only one input. But if you have only one sound source, you certainly don’t need a pre-amp. Unless you have a turntable without integrated pre-amp, in that case you’d need one.

Taking off the back cover reveals the most important part of this amp, V-FET transistors. V-FET also called SIT transistors have very similar characteristics to triodes, compared to other transistors and if you ever heard any valve amp, you can be certain this one is going to sound bloody awesome. 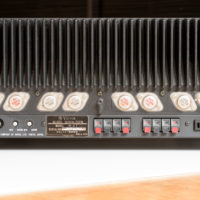 There are not that many companies, that implemented V-FETs in their amplifiers. It was Yamaha, SONY, Sansui, Hitachi and of course Victor. Unfortunately, all of these amps were discontinued very early mainly because of very high production cost. V-FETs are known for being a bit warmer, well, they can actually get quite hot and that’s why Victor stuck them to a huge heatsink. That should keep the transistors cool….ler. There is, of course, a protection circuit that should protect the amp from overheating. When the temperature exceeds 85 degrees Celsius, which is 185 degrees Fahrenheit, the power is cut off.

Unlike Sony or Yamaha which used their own V-FET transistors, Victor used transistors manufactured by NEC and I wonder how it compares to Yamaha’s or Sony’s V-FETs. Well, since I have only Yamaha’s amp, it has to be the B-3.

It’s not a big surprise, but it sounds very similar to the Yamaha’s B-3. The sound is very detailed, it has very nice and deep bass, imaging is perfect and it’s very clear, however, even though it’s very similar to the B-3, the sound is a bit….dry and not so musical compared to the B-3. I’m not sure if it’s just me, but the spoken word sounds a bit weird. Well, not exactly weird, but a bit unclear or vailed compared to the B-3. I am not saying it’s rubbish, far from it, it’s a cracking little device, it’s just not as good as the B-3, but certainly better than almost anything manufactured today.

She didn’t have any problems driving either Yamaha NS-1000Ms or JBL HP 580s. NS-1000s sound very neutral on their own and this amp made them sound a bit warmer and a bit nicer to listen to. On the other hand, JBLs are a lot bassy especially with Yamaha’s B-3s, and again, when I’m comparing these two, Victor lacks a bit of bass, but it’s got still more bass, than for example Yamaha CA-2000.

This piece of electronics is very, very rare. There are not too many units left, let alone working units. She needs to be taken care of and cherished. And when she’s properly serviced, she’s gonna work and she’s gonna work perfectly for many years to come. The problem is, that the V-FET transistors are no longer being produced, so if any of them die, you have a very slim chance of getting a replacement. So, if you’re not afraid that something like that happens one day, go get it, it’s certainly worth it, if you find one, that is.