Rendition was a company that made one of the first VGA 3D chipsets for PC, they called it Vérité, it means truth in French. Why truth you ask, I’ve got no idea. Rendition was founded in 1993 in Mountain View, California. They had announced their first chipset, which was V1000, in 1995 but the production was delayed and the chipset was finally released in October 1996, it took them some time. At first, Rendition’s chips were using their own proprietary APIs, Speedy3D for DOS and RRedline for Windows. At the same time Microsoft started working on Direct3D API for Windows and chose Rendition’s V1000 as a reference card for that. Another supported API was OpenGL. Although initially used for systems such as CAD, it found its way to PC games due to its pretty easy programming capabilities. Even though the first ever 3D accelerated Quake port was for the V1000, John Carmack didn’t fancy Rendition’s APIs much, he also hated Direct3D, so he decided to port Quake for OpenGL, which could’ve been used on virtually any system. 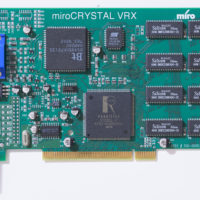 Right before the V1000 came out, lots of game developers wanted to jump on the 3D gaming bandwagon and announced support for the V1000 chipset for their upcoming games. Amongst them were developers such as id Software, Looking Glass, Papyrus, etc. etc.

Even though SGI was working with 3D graphics for years with their Geometry Engine that was used for various applications such as pilot training or 3D effects in the movies, the V1000 was one of the first 3D cards for the PC. Moreover, SGI computers cost the earth, it could climb up to $1 000 000 adjusted for today’s inflation, so it wasn’t exactly affordable for any gamer. The V1000 was 2D/3D combined PCI card, AGP wasn’t a thing yet in 1996, its main competitor was 3Dfx with their Voodoo Graphics 3D only accelerator card. With the V1000 you didn’t need a separate card for 2D and 3D graphics, moreover, it cost $200 which was about half of what Voodoo Graphics cost. So, Rendition was on the right path, but could it compare to the Voodoo in 3D performance? We’ll find out later.

There are two V1000 versions, V1000E and V1000L. The E was the first version and was clocked at 50MHz. Later that year Rendition released the V1000L, it was a lower powered version and ran at 60MHz. So, the theoretical speed increase should be about 20%.

Rendition didn’t make graphics cards themselves, they were just selling the chipset to graphics card makers, such as Creative Labs, Sierra, Canopus, Intergraph and Miro Computer. I’ve got  Miro VRX and Creative 3D Blaster PCI. 3D Blaster uses V1000E and VRX uses V1000L, unfortunately, 3D Blaster is somewhat broken, its 3D part always crashes the computer, so I can’t test it, which is a shame because 3D Blaster is sort of special compared to the rest of the cards. All graphics cards with the V1000 chipset utilize Speedy3D and RRedline APIs, however, 3D Blaster’s got one trump up its sleeve, and that’s Creative’s own API, called CGL (Creative Graphics Library). Some games’ 3D accelerated versions were released only for CGL, which would be cracking to test as well, but I was more interested in the games that were released for both CGL and Speedy3D to compare the speed. Maybe some other time. Both cards are equipped with 4 MB of EDO RAM clocked at 50MHz on the 3D Blaster and 60MHz on the VRX. Every card uses slightly different memory modules. While the Canopus Total3D looks almost exactly the same as the Miro VRX, VRX uses different memory modules. The Total3D uses 40ns modules, while the Miro uses 35ns modules. I don’t reckon it’s got some impact on the performance though.

The V1000 had one advantage, which also happened to be sort of disadvantage on certain systems. The Rendition chip was able to use DMA transfers to transfer data, which was more efficient and faster way. The problem was, not all motherboard chipsets were able to make use of this feature and that resulted in horrible performance on some motherboards. Another loss of performance was partly caused by an early BIOS, which took some time for Rendition to tune. The V1000 supports all the basic texture mapping with perspective correction, bilinear filtering with texel caching, per polygon mip-mapping, z-buffering, anti-aliasing, fog, gouraud shading and all blending modes. Well, just about everything that was possible to support at that time. Maximum resolution was 1408×1024 in 16 bit colours. Since Rendition sold the chip only to well established companies, the build quality was rather good across the board. Unlike its successor the V2000, which was sold practically to everybody, there were some cards with questionable build quality to say the least.

Unlike today, where you’ve got only two companies to choose from, nVidia and Ati, back in 1996 there were many companies trying to succeed with their graphics cards in this new 3D gaming race. 3D Labs, 3Dfx, Matrox, Number Nine, NEC, S3 and of course two crappiest companies at the time nVidia and Ati. I’ve got some of the cards from that era, so I’ll pit them against the V1000 to see how good it was compared to the rest of the competition. I’ve got ATI Rage3D, 3Dfx Voodoo Graphics, Number Nine Imagine 128 Series II, S3 Virge, 3D Labs’ Permedia and Matrox Mystique. I’m missing two chipsets though, they could be quite nice to have as well. One is nVidia’s NV1 chip, but the price of the card today is so nonsensical, I just didn’t want to buy that and the second one is NEC’s PowerVR, which I couldn’t find anywhere.

To test the card as accurately as possible, I’m gonna run it under DOS and Windows 95 on the best consumer contemporary system, which was Pentium 200MHz in 1996. 2D performance was, how to put it…….utterly pathetic, at least in games or whatever, that didn’t support VESA display mode. That’s why Rendition released renutil, this little program sort of redirected VGA display mode to VESA display mode. This fix helped a bit in some  games and programs. Unfortunately, it didn’t work in games such as Doom, ROTT, etc. that use Mode X VGA mode. It’s alright if you want to enjoy occasional screenshot, but it’s hardly enough to play the game though. On the flip side, games such as Duke 3D are working fine if you use one of the VESA modes. If I had bought this card back in the day for DOS non accelerated games, I’d be pissed off. But I’d be pissed off even more, if I’d bought Imagine 128, which was supposed to be the most powerful 2D card at the time. It did quite poorly in every test, actually it was the worst card of all the tested GPUs. The V1000 was clearly the best when running under one of the VESA modes, but on the other hand it was clearly the worst when it was running under Mode X.

The card works perfectly fine in Windows 95 GUI. I have used latest VRX drivers under Windows 95 OSR 2.5. I haven’t installed any other drivers or anything except for the Intel chipset drivers. The picture quality is outstanding and the 2D performance is excellent in every possible scenario. By “excellent”, I mean it’s better than the rest of the competition. Running for example Unreal in software mode is unbearable, but still a bit faster than on the rest of the cards.

There are only handful of games that use Speedy3D and only some of them use other APIs as well. Let’s have a look at some differences between the cards, shell we.

Descent II – Glide version of Descent 2 was somehow broken, I couldn’t make it work properly, I ended up with crappy graphics and missing textures. S3 version looked much better, but it was so slow, it was pretty much unplayable.

IndyCar Racing II which was re-released as a CART racing supported only Speedy3D API under DOS.

Rebel Moon was another game that supported only Speedy3D, but the game was utter rubbish.

Scorched Planet also supported 3Dfx Voodoo cards, however, I couldn’t find the patch. It just vanished from the web for some reason. However, I have found the version for the Matrox Mystique, which was Windows only.

Tomb Raider supports most APIs. Apart from the V1000, it supports S3 Virge, Matrox Mystique, NEC PowerVR, ATI Rage and 3Dfx Voodoo. ATI works only under Windows, however, I couldn’t make it work. Unfortunately, there is no FPS counter or timedemo or something similar, so the only way you can tell if it’s slower or faster are your own eyes.

Whiplash/Fatal Racing – It supported Voodoo cards and there was supposed to be some kinda version for S3 Virge, that was bundled with some Hewlett Packard computers, which I couldn’t find anywhere.

The last, but most interesting of them all was of course id Software’s Quake. Version for the Speedy3D was called vQuake which is the only DOS accelerated version of Quake. I’m going to test it against Windows version called glQuake, which should work practically with any 3D accelerator card, unfortunately it doesn’t. It works only with the Voodoo, the V1000 and S3 which is kind of broken and slow. At least I’ve tested all the cards running software mode under the DOS, where the V1000 was, again, the fastest running under the VESA mode.

Almost all Windows games with RRedline support don’t need any patch, it’s already included in the retail version. Quake 2 and Hexen II needed to be patched though. Direct3D is a disaster for most of these cards. The only two cards, fully capable of rendering 3D graphics in any Direct3D game were V1000 and Voodoo. Watch the video to see how it looks like in 3DMark99. Final Reality was much better choice for benchmarking the cards. Even though the V1000 can handle OpenGL, its rather piss poor performance renders the card quite useless in any game really. But again, still much better than the rest. Other cards either don’t support the OpenGL at all, or it looks like horrible.

Well, the V1000 was one the first 3D accelerators and it was an ambitious one. Unfortunately, it didn’t turn out as the Rendition thought it would. The piss poor Mode X performance, the DMA problems and its incomprehensive APIs that every developer hated, put the card in second place right behind the Voodoo Graphics. For $200, it was on par with the other cards, with the exception of Voodoo Graphics which cost about $300. I’ve spent the last fortnight testing all these cards, the V1000 was clearly superior to other competitors in every way, except for the Voodoo, which was a tad faster, about 10-20%, however, it can’t display 2D graphics and the picture quality was bloody awful, it looks like somebody jizzed on a literal pile of shite. I suspect the low picture quality made the card run faster by cutting some corners and that was the 3Dfx’s success. Not visually, of course, but the performance was just better. If I had to choose between the two though, I’d probably choose V1000 even though it’s a bit slower. If I didn’t care about the money, I’d take both. These two cards were the only 3D accelerators from that era that were capable of running 3D games at some reasonable level, other cards were just rubbish. Pretty much every game that supported Speedy3D ran perfectly fine and was playable. The same goes for the RRedline, however, the technology, the graphics and the games themselves made a great progress very quickly and made the V1000 obsolete rather soon. Rendition released V2000 series in 1997, but that’s a story for another time.