This is Gabriel, an average bloke from New Orleans, writer and owner of St. Georges book store. He’s bit of a smart arse and sort of womaniser, as is quite obvious right from the start and the first conversation with his assistant. He flirts with almost every female character in the game, as long as she’s younger than 100. On the other hand, he is not some skirt chasing wanker who can’t keep his winkle in the trousers. He is smart, sometimes funny and during the game, it’s clear he won’t leave his friends at the first sign of danger. Yeah, someone would scream out “toxic masculinity” these days, but let’s stay in the sensible world of 1993. 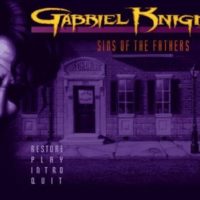 If you click New Game, you’ll miss intro, which is for some reason separate item in the menu. Perhaps if you want to watch it even if you’re half way through the game. The story is set in New Orleans and it revolves around voodoo as does almost everything that’s set in New Orleans. The game begins with the conversation between Gabe and his assistant Grace. He is working on a new book about voodoo and had Grace to find him some information about this topic. Right from the start, you find out about strange murders, that plague the city of New Orleans. Locals call them “Voodoo Murders” as they recon it has something to do with voodoo, because of the way the victims are killed. And since Gabe is researching voodoo for his new book, these murders become big part of his research. In fact, the entire game is a detective story about these murders and not long after start you find out, it’s an outstanding game with elaborate story based on local folklore with actual real places and people. For those not familiar with voodoo, it’s a religion brought to French Louisiana by African slaves during eighteen century and is sort of practised till this day. Although, today, it’s more like a tourist attraction than anything else. As the story develops, Gabriel gets deeper and deeper into the murders’ mystery and finds out some unsettling facts about his heritage. I am not, however, going any deeper and deeper into the story, I don’t want to spoil it for those who never played Gabriel Knight. 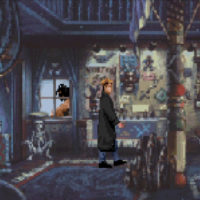 I must say, I love how the characters are portrayed. The game does a cracking job setting up its characters. Everyone’s personality is different and it’s perfectly set in the game events. Like detective Mosely, Gabriel’s childhood friend, who believes he’ll play major part in his new book, so he provides Gabriel with confidential police information about voodoo murders. He was played by Mark Hamill, that’s when he was still considered an actor. Although, his performance in Star Wars wasn’t exactly stellar, he used to be a hero for many boys, unfortunately, not anymore. He did a great job here, though. Another interesting character is Malia Gede, rich girl who becomes unreachable Gabe’s wet dream the instant he sees her. She plays a big part in the story and on every occasion, she gives Gabe a hard time, I almost felt sorry for him couple of times. I already mentioned his assistant Grace, who loves taking the piss out of Gabe every time they talk. Everyone plays some role in the story and virtually no character is there just to fill the space. 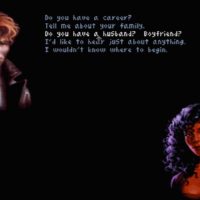 Gabriel Knight is a classic point and click adventure. As such, you control Gabriel with mouse cursor to pick up, use, talk, look, etc. Right mouse button cycles through different functions, or you can move the cursor to the top of the screen, where menu appears and you can choose what you want to do. Left click of course, executes the function. There are not many items you can find in the game, but at least they need to be used logically. You don’t use tweezers to take out your haemorrhoid or stick it to someone’s nose, but you actually use it to pick up something tiny. The game is more about talking with other characters, which give you clues and important information. When you discover something important during dialogue or pick up some item or use some item, it makes a ding sound and you receive some points which indicate how much you progressed in the game. You can even get a clue just talking rubbish, so don’t miss or skip any dialogue. And if you feel, like Gabe’s moving too slow, you can crank up walking speed a bit. 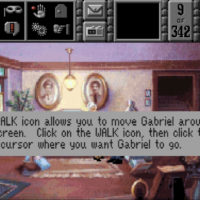 Considering the age, graphics is stunning, at least I fancy the hand drawn environment and characters. In the setup, you can choose between VGA and SVGA mode. Unfortunately, SVGA mode only makes menu and some usable objects in higher resolution. It’s a bit of a shame but other than that, it’s got perfectly detailed environment and characters. Unless you play the game on very large screen, in that case, it really looks like crap. 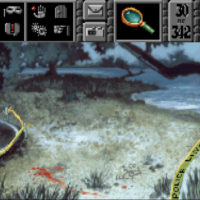 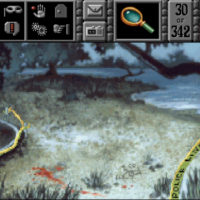 Music is brilliant. It was composed by Robert Holmes. He is not well known composer and I’m almost positive, he got the job mainly because he was a producer and his wife is Jane Jensen was a Sierra’s CEO or maybe I’m wrong I don’t know. Nevertheless, he’s done a pretty good job. I wouldn’t call it perfect or ground breaking, but it’s definitely above average. It uses MIDI as most of the games of that time. And also, as most of the games of that time it was recorded using Roland Sound Canvas SC-55, so the best way to enjoy the music is some kind of Sound Canvas. 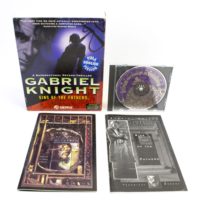 There are two versions of Gabriel Knight, diskette and CD version. They are practically the same, except for the main menu which uses different background image, video sequences are just a series of static images in the diskette version and the diskette version also lacks voiceovers. Gabe’s voice is done by Tim Curry. I am not too familiar with New Orleans accent, but to my ears, it sounds a bit dodgy and overdone. Other than that, other characters are superbly done.

Five years ago, Jane Jensen released 20th anniversary edition with remade graphics, remastered music and some new puzzles. Yeah, environment looks good, but I don’t fancy how the characters look or how they speak. I prefer 1993 version over that. Gabriel Knight is one of my all-time favourite games and I reckon it’s not just my favourite game. I know, I said that couple of times already in previous reviews, but it’s true, I’ve got so many favourites. Well, to sum this up…  Brilliant story, outstanding characters, great music and tons of fun playing the game. It’s a shame they don’t do games like this anymore. If you never played the game, go ahead, grab your mouse and get to it, it’s well worth it. And that’s it for this review. Enjoy the soundtrack, leave the comment and don’t mess with voodoo. Catch you next time.