War, war never changes. Mankind will always strife to annihilate entire nations. But humans have a different enemy this time.

Future wars was released in 1989 by Delphine Software. It was their second game and it was so successful, they made a name for themselves with that. For some reason, it’s got about trillion names. Future Wars, Time Travellers, Adventures in Time and Time Travellers: The Menace. It came out for DOS, Amiga, Atari, PC98 and Sharp X68000. I currently own only the PC and Amiga versions, so I can’t speak for other platforms, but from what I saw it seems like only the Amiga version is a bit different. PC version uses MIDI for music but also for sounds, which doesn’t sound good. On the other hand, Amiga version uses modules for music and PCM for sounds, sounds so much better. There is also slight difference in graphics. Amiga version uses cracking transparency effect for displaying subtitles, while the PC version is quite bad. And since Amiga version is apparently superior, so I’m gonna use it for this review.

Future wars received very good reviews back at 89′. It was made by six passionate French guys who cared about the story and cared about the game itself. Today’s gaming industry is a swamp where you just dump the money and get nothing in return. Companies employ thousands of people to produce something that’s for most parts rubbish anyway. I’m not going to screw around and jump straight into it.

After a short, mandatory intro, which you can’t skip, you are presented with a skyscraper and a platform. No options, no settings, just straight to the game. You can see our main character on the platform the hero. He’s actually called the hero. I know what you reckon. This bloke, the hero? And that guy in a window is his boss, he seems to be a bit cross with him for no reason. I’m pretty sure our HERO has got a lot of courage to tell him off. 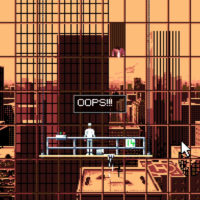 This is classic point and click adventure game. As in most early adventure games, you have to choose your action, point and then click. You can choose from examine, take, inventory, use, speak, action, and because heroes don’t open, close, push and pull, we’ve got operate! It is one of the first adventure games and a great one at that.

I’m gonna start with the crappiest part of the game, controls. As I said before, it’s classic point and click, however, sometimes, even though you point and click as much as you want, the bloody hero just won’t do what he’s told. And that’s the most frustrating aspect of the game. Trying to punch in the security code in this game when you’re about to get crushed is a bit nerve wrecking. In newer games, the character usually finds his way to the place you clicked on. Unfortunately, not here. He gets stuck almost everywhere, it’s bloody annoying. And when I was trying to get through tight spaces, I wanted to kill myself. And that’s not all. Picking up items is almost as frustrating as walking around. You need to stand right on top of the item you want to pick up. If you enjoy pixel hunting, you’re in for a treat here. I sort of like pixel hunting in adventure games, but this system makes it unnecessarily difficult or pain in the arse. 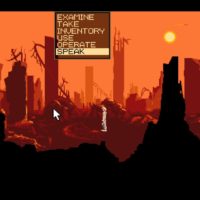 If you are impatient and march forward without checking out every single pixel on the screen, you may end up starting the game over or loading some earlier saves. Unfortunately, I was using only one save slot, so it was the former for me. Why is that you ask? You may miss an important item, and the game allows you to proceed to a location where you need that item, but you can’t go back anymore, so it’s game over for you. 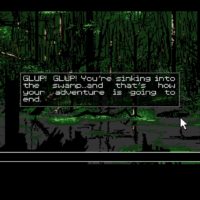 All of that is almost insignificant if you consider the story and the story is the most important part in adventure games, at least to me. And this story is very interesting and fun to follow. I’m not saying it’s a masterpiece, but it’s really good. Our bloody hero is a window cleaner who doesn’t like his boss, but who does, right? It starts as an innocent story about the guy who’s going through his boss’ stuff. There he discovers a secret passage, which of course he must explore, as everybody would. And this is the first time, you can actually die in the game, which is not uncommon. You can die quite often, so you should save your progress often as well. After you successfully punch in the right code, which a job for a saint with these controls, you find yourself in some kind of scientific lab with some weird looking equipment. And this is where you discover, that time travel is not just a fiction. As you progress through the game, you’ll visit the past and the future, where you’ll find out why the game is called future wars. I’m gonna stop here, I don’t to give out too much about the story and spoil it for you, in case you decide to give it a try. As in most adventure games, you need to solve some puzzles, which are not hard to figure out, for most parts. 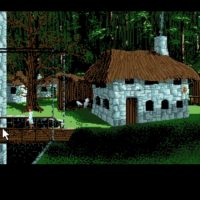 Graphics is excellent for its time. It adds to the outstanding atmosphere of all places you travel to. It reminds me of Delphine Software’s later game Another World. And for a good reason, it was designed by the same bloke. Some of the locations are completely silent. There is no music and neither are sounds. Music in Future Wars is not great, but it’s not bad either, it’s just ok. As I said before, PC version uses MIDI to generate sounds and to be honest, PC sounds are plain rubbish in comparison to Amiga.

And that’s it for the review, I hope you enjoyed it and I’ll catch you lot next time.