“What did they do to me? The robot won’t let me off the bed. I know they’re watching me on the monitor. The noise in my head is careening out of control. There’s blood all over my fingers from the scratching. Maybe they’ve invented some terrible new way to die and I am the first one they’ve ever tried it on. I wish it would just happen right now……… It’s all stopped. It’s very quiet. I must rest.”

BioForge is full of journal entries like this. When I first saw this box with its weird sort of radioactive robot hand on the cover, I fell in love with it and I haven’t even played the game yet. It is bloody awesome cover. BioForge was developed by Origin for MS-DOS in 1995. Origin’s slogan was “we create worlds” and boy, this is some world they created. 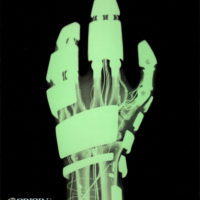 The game starts with a pre-rendered intro, all games started like that back at 90’. Someone (apparently main protagonist) is being transported to some facility on some distant planet in distant future, then he gets cut to pieces, while still awake by some creepy looking bloke, and that’s where the intro ends. It is pretty vague but for a good reason. BioForge story is an amazing cyber-punk Sci-Fi horror that makes lot of films or books run for their money. It toys with your deepest emotions through entire game, it shows you blood, it shows you horror, it shows you despair and madness. Horror doesn’t strike you when you fight an enemy or watch their mutilated bodies and body parts lying around, it strikes you most, when you read journals that you’ve found along the way and when you realise, that you will never be a normal human being again. This game attacks your innermost emotions and feelings, it can get you goose bumps just by running about and listening to ambient music and screams. 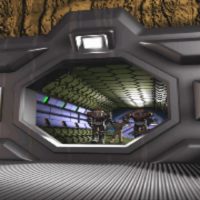 You play as a newly created cyborg named Lex. You wake up in a locked cell guarded by some kind of medical robot with homicidal intentions. After you simultaneously get rid of the robot and break the cell force field, you find yourself in a prison of sorts. You apparently don’t remember anything and you don’t know where you are. Step by step you’ll unravel what actually happened to you, why there is a facility on this planet and how to get the hell out of there. To find all the answers, you’ll need to solve some puzzles and fight a lot of enemies. BioForge is part adventure game, and part fighting game. This combination makes it quite unique even by today’s standards. 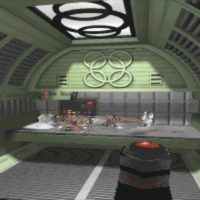 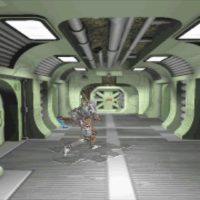 After you get out of your cell, you need to find a way through malfunctioning door. To do that, you need to get into this guy’s cell to get the fork? And yes, he’s blue. And without an arm. Which of course you can use to beat him up with. Fighting is a big part of the game and you’ll be doing lots of that. It kinda reminds me of Virtua Fighter, even though it’s not as fast or even that good. Controls are a tad clunky during fights. Normally, you move about using arrow keys, space is used for picking up and using items, to run hold shift, inventory opens with ‘i’, options with ‘o’, and your cyborg body diagnostics with ‘d’. If you wanna fight in hand to hand combat, take a guess what key you’d use to enter combat mode. In combat mode, you can use kicks, punches, head, blocks and you can even do somersault. To kick, just press “control” plus any key on the num pad. Try all of them and see what they do. Same thing with punches, but you need to press “alt” instead. It takes some time to get used to controls and once you do, you’ll be cracking every skull in a game like a pro. When you get through the intro, you get to choose combat difficulty. Easy, medium and hard. 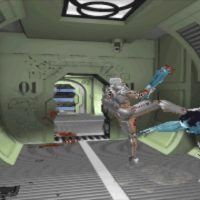 I’ve heard people complain about combat difficulty not having any effect on gameplay or story, and maybe, just maybe, that’s because it’s a ‘combat’ difficulty, which affects ……………… combat. There are of course some differences, for example if you play hard difficulty, it takes about three or four hits to get you killed, and also it takes a lot more to kill an enemy. To make it even harder, you can’t use the same move in a row. If you do, the next move is a lot slower. I really enjoyed the fighting part, even though some enemies were so bloody hard and it took some number of deaths before I defeated some of them. When you get injured, you start limping, and when you get injured a lot you start dragging your leg behind and even fall down when you attempt to run, I like it, it’s a nice touch. When you get tired of fighting hand to hand, there’re also couple of guns. You can even reflect shots from certain surfaces. That’s pretty good, you can kill an enemy behind the corner, unless you kill yourself by mistake. 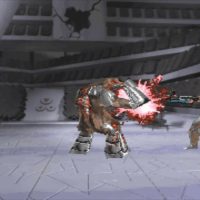 Adventure part consists of picking up some stuff, using it on other stuff and getting some stuff in return, solving puzzles and of course astonishing story, which is perfectly integrated into this amazingly detailed world, at least it was in 90’. You’ll find computers, journals and terminals along the way. Reading through them not only adds to the story and creepiness of the place, you’ll also get viable information like passwords and codes. Even though the game is quite old, it still looks brilliant at least in my opinion. Graphics are unmatched for the year, Origin used state of the art motion capture and because it wasn’t perfect and couldn’t show smooth human animation, they decided to make the main character a cyborg. As I said before fighting is a big part of the game and the motion capture helped a lot. BioForge uses fixed camera angles on pre-rendered backgrounds, like Alone in The Dark or Resident Evil. It may behave a bit unpredictably at times, but again, practice makes perfect and once you get used to it, it works like a charm. 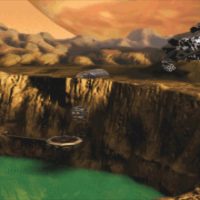 They used MIDI for music and to be honest, don’t even bother using FM synthesis. Just use some kind of wavetable card if you’re playing on older computer or software wavetable synthesis if you’re playing in DOSBox, otherwise you miss a lot. Music fits perfectly in the game’s setting of some hidden lab place on a hostile planet. Sound effects are generally excellent. Except the sounds of actual hits. It kinda sounds like cheap Chinese film from that era. Other than that, sounds are great. Distant screams, eerie environment sounds, dialogues with your enemies, which are a bit cheesy but fit quite well.